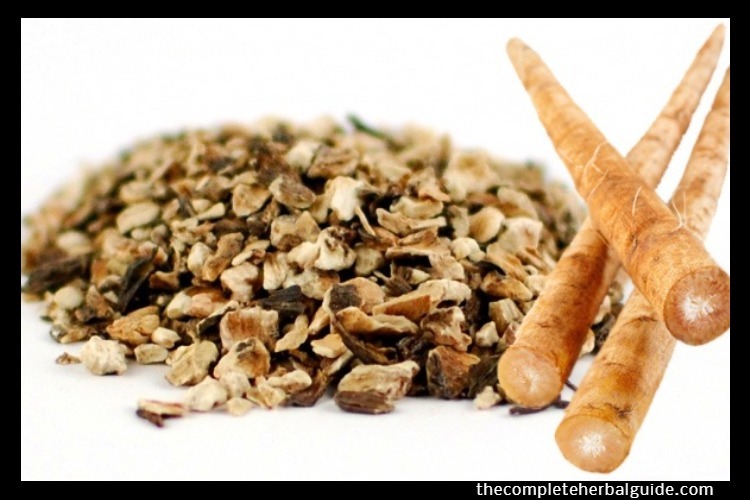 Burdock is the common name of any plant of the genus Arctium of the family Asteraceae (aster family). It is a common weed native to Europe and Northern Asia and is now widespread throughout the United States as well. This plant is a large biennial with broad, blunt leaves up to about 40 cm long. Burdock grows well in the wild. It thrives in light, well-drained soil. Burdock has alternate, wavy, heart-shaped leaves that are green on the top and whitish on the bottom.

The flowers, usually purple, are followed by roundish many-seeded burs. The deep roots are brownish-green, or nearly black on the outside. Burdock root is very crisp and has a sweet, mild, and pungent flavor. The root is the primary source of many herbal preparations. The leaves are generally less potent than the root and seed when used in medicinal preparations. Other names of burdock include beggar’s buttons, bardana, burr seed, clot-bur, clothburr, cocklebur, cockle buttons, fox’s clote, Gypsy rhubarb, great burr, happy major, hardock, hareburr, love leaves, philanthropium, personata, thorny burr, and turkey burrseed.

Burdock root contains high amounts of inulin and mucilage. The carbohydrate inulin can comprise up to 50% of the plant’s ttotal mass Inulin is made up of many fructose chains which are responsible for burdock’s hypoglycemic activities. It also contains polyacetylenes that have demonstrated anti-microbial activity. Other active constituents of Burdock roots include alkaloids, essential oil, flavonoids, glycosides, polyacetylenes, resin, tannins, and volatile oil. The burdock seeds are rich in vitamins A and B and essential fatty acids.

Burdock has traditionally been used for a wide variety of conditions, including chronic skin ailments, rheumatoid arthritis symptoms, and cancer prevention. Extracts of burdock root are found in a variety of herbal preparations as well as homeopathic remedies.

Burdock root is used to treat…

Burdock is used in the treatment of skin conditions that result in the dry and scaly skin such as eczema, psoriasis, and dermatitis.   It has been traditionally used as a blood purifier to clear the bloodstream of toxins. It promotes perspiration and the release of toxins from the body. Preparations of burdock root are also used to promote perspiration and the excretion of urine and to treat ailments and complaints of the digestive system. In Traditional Chinese Medicine, burdock root in combination with other herbs is used to treat sore throats, tonsillitis, colds, and even measles. 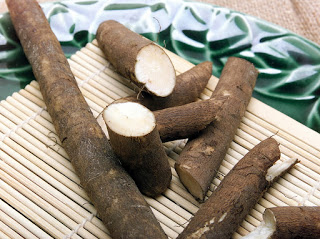 In folk medicine, burdock has also been used as a laxative and to relieve inflammatory conditions such as arthritis. It will help restore friendly bacteria in the system after antibiotic use and may bring relief in cases of chronic arthritis and gout. Burdock root has an antimicrobial action which has been attributed to the polyacetylenes in the plant.

How to take burdock root products

Burdock products typically consist of fresh or dried roots. Burdock root products are available in forms of dried root powder, decoction (liquid made by boiling down the herb in water), tincture (a solution of the herb in alcohol, or water and alcohol), or fluid extract. Topical preparations of burdock are also used for skin problems (such as eczema) and wounds. For the dried root preparation in capsule form, some herbalists recommend 1-2 grams three times per day. When making burdock tea, take two to six grams of dried root in 500 milliliters of water three times daily, one cup three to four times daily. Take 8 to 12 mL of tincture (1:5) three times a day. The tincture may also be applied to a cloth and wrapped around affected skin area or wound.

Few side effects have been reported at the recommended doses. Pregnant or nursing women should avoid burdock as it may cause damage to the fetus. There are no known scientific reports of interactions between burdock and conventional medications, including medicines used for diabetes. However, burdock is not recommended for patients taking insulin or other hypoglycaemic medication, as burdock may lower blood glucose levels. Burdock may increase the diuretic effects of other herbs such as licorice. Skin allergies to burdock have been reported. 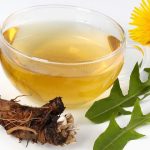 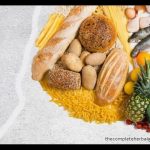