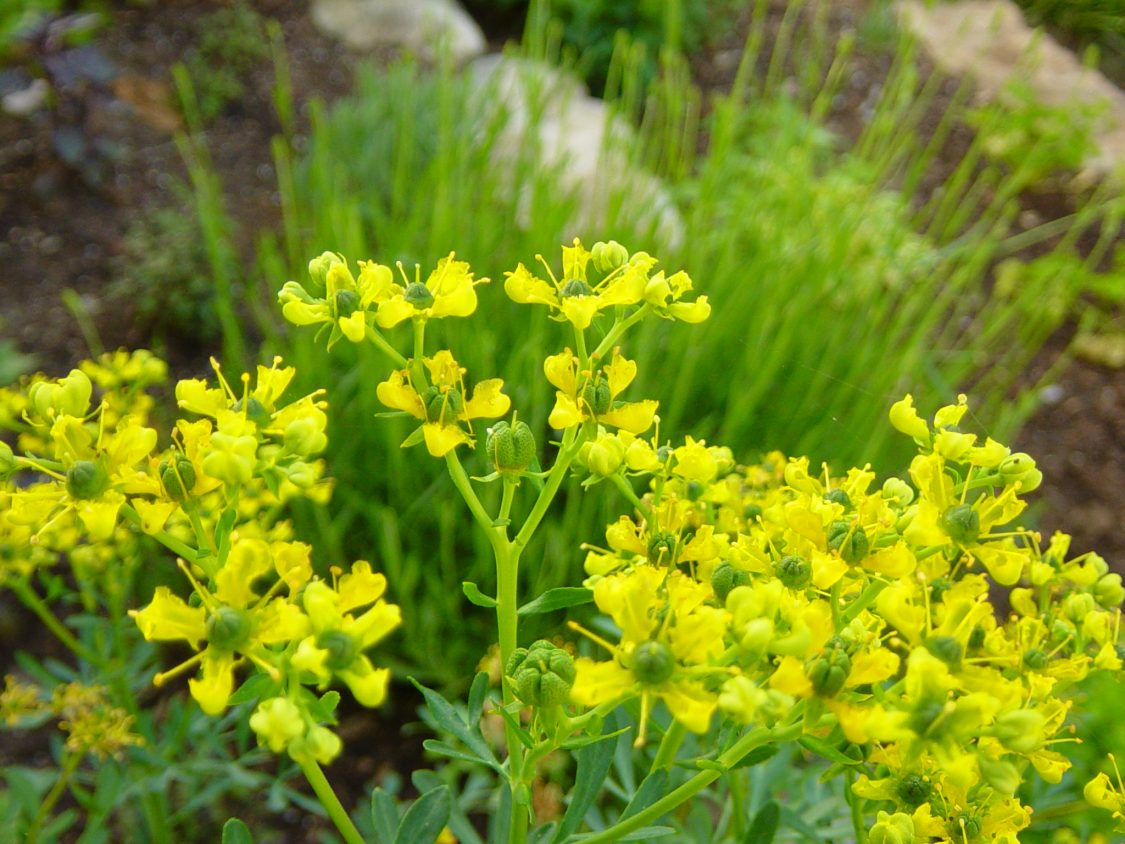 Rue helps relieve nervous spasms, painful cramps, menstrual pain, and headache. It is also said to ease the discomforts of indigestion, coli, flatulence, and because Rue contains powerful rutin (which strengthens capillaries), it is not only used to enhance eyesight but is also believed to improve cardiovascular health by stimulating circulation through stronger blood vessels.

The name rue is properly restricted to the shrubby herbs of the genus Ruta, ranging from the Mediterranean to E Siberia. The common rue of history and literature is R. graveolans, which has greenish-yellow flowers and blue-green leaves sometimes variegated, with a very strong odor and a bitter taste.

The leaves are now sometimes used in flavorings, beverages, and herb vinegar and in the preparation of cosmetics and perfumes. In medieval times rue was much used as a drug; its use as a condiment was thought to prevent poisons from affecting the system.

Rue was strewn about law courts in parts of Great Britain as a preventive against diseases carried by criminals.

It was sometimes associated with witches but also symbolized grace, repentance, and memory. Shakespeare in Richard II refers to it as the “sour herb of grace.”

The family Rutaceae is classified in the division Magnoliophyta, class Magnoliopsida.

Rue is a hardy, somewhat shrubby (sub-shrub), evergreen perennial that may grow to three feet in height in full sun (but will tolerate light shade) in well-drained, alkaline soil.

The soil may be poor and suitable only for the hardiest plants. Rue bears erect, branching stems and aromatic blue-green leaves, yellow flowers with green centers that emit a powerful, disagreeable odor, and an exceedingly bitter, acrid, and nauseous taste.

The plant is native to southern Europe and northern Africa and has been naturalized throughout Europe and North America, where it is cultivated in gardens (it is one of the oldest garden plants grown for medicinal purposes). It has also escaped from gardens and may be found growing wild in pastures, roadsides, waste places, and abandoned lots.

The botanical name, Ruta, is derived from the Greek word, reuo, which means “to set free,” because this herb is so effective in treating various diseases.

Hippocrates noted that Rue was the main component in “mithridates,” a Greek all-purpose antidote for poisons and the Greeks also regarded it as a powerful anti-magical herb, because it remedied nervous indigestion attributed to witchcraft.

The Romans introduced Rue throughout Europe, as the plant had already been recognized as medicinally sound for more than eighty complaints by the time of the early Roman Empire.

The first-century Roman scholar, Pliny, reported that Rue preserved eyesight and noted that painters and engravers ate it to sharpen their sight. Supposedly, Leonardo Da Vinci and Michelangelo both claimed that Rue’s metaphysical powers improved their eyesight and creative inner vision.

In the Middle Ages, Rue was considered a powerful defense against witches and would bestow a “second sight” or psychic powers in those who used it. Rue was considered an important “strewing herb” and anti-plague plant, and sixteenth- and seventeenth-century “herbals” advocated its use to ward off pestilence and as an antidote for all sorts of poisons, from toadstools to serpent bites.

The plant was carried in nosegays to repel the lice of beggars and was even used well into the eighteenth century in law courts to counteract prisoners’ vermin and germs (jail fever).

In 1625, the Neapolitan physician, Piperno, commended Rue as a specific against epilepsy and vertigo, and in 1653, the great English herbalist, Nicholas Culpepper, prescribed it for sciatica and joint pain.  European settlers introduced Rue to North America, where it became a popular folk remedy, and doctors and apothecaries specified it for many medicinal and practical uses.

The strong, musky odor has been used to repel noxious insects and fleas, and because it is so pungent and bitter, very small amounts are used for culinary purposes and are added to cream cheese, egg, and fish dishes, and meat sauces to provide an interesting musky flavor.

Italians ate it in their salads for good eyesight, and the leaves were used to flavor Italian grape liqueur (grappa). It is a bitter, pungent, warming herb, and the entire plant is used in herbal medicine. Some of the constituents included in Rue are essential oil (containing caprinic, plagonic, caprylic, and oenanthylic acids) and flavonoids (most notably rutin).

Rue is considered a “calmative” substance that soothes the nerves and reduces tension and anxiety since it has a direct effect on the nervous system. It is thought to be effective in cases of nervous heart problems (including palpitations), hysterical spasms, and nervous headaches.

Rue has been used by herbalists for giddiness, hysteria, nightmares, convulsions, confusion, dizziness, vertigo, and epilepsy and is also said to be useful for nervous disturbances due to female irregularities.

As an antispasmodic, Rue is believed to help relieve cramps in the bowels, stomach, and muscles, as well as menstrual cramps, and generally, relax overall spasms. Rue tea for menstruation is a great treatment if you suffer from menstrual cramps.

The strong, stimulating properties in Rue greatly affect the uterus. It has been used as an emmenagogue or agent that brings on suppressed menstruation. It is also thought to ease painful menstruation and the cramping associated with it.

Rue is considered a strong stimulant that is a tonic for the digestive system. The herb has been used for centuries to relieve stomach cramps due to nervous indigestion, pep up the appetite, and alleviate gas and colic. It is also said to induce bile production, which is also important to the digestive process.

Rue is thought to be a circulatory tonic that supports good cardiovascular health. The flavonoid, rutin, is an agent that reduces capillary fragility and is also known to strengthen capillaries, reduce blood pressure, and increase circulation and blood flow to the heart.

Herbalists use Rue to control abnormal blood pressure. That same action also strengthens the capillaries in the eyes, thus improving eyesight and sharpening vision (supporting the historical use of the herb for failing eyesight). This quality is also useful in preventing and easing varicose veins.

Because Rue is so stimulating to the uterus, it has been called an abortifacient, or substance that induces the premature expulsion of the fetus. The alkaloid, skimmianine, in Rue, has a direct, stimulant effect on the uterine muscles (causing an abortion in lab animals) and, thus, should never be used by pregnant women.

Rue is thought to relieve gouty and rheumatic pains, tennis elbow, joint pain, arthritis, neuralgia, and sciatica.  It has also been used to ease the pain of an earache and in poultices to relieve the pain of a backache.

Rue as a Diaphoretic

Rue is thought to promote perspiration and may help in lowering fevers and clearing toxins from the system through the skin. As an anti-tussive, it loosens phlegm and is said to be good for coughs, croupy affections, and bronchitis.

Rue as an Anthelmintic

It is an agent that will destroy and expel intestinal worms. Used externally, Rue may be included in a bath for sore, strained, and tired eyes and in topical washes for skin diseases. 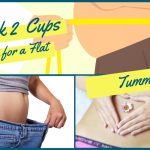 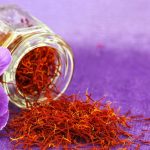 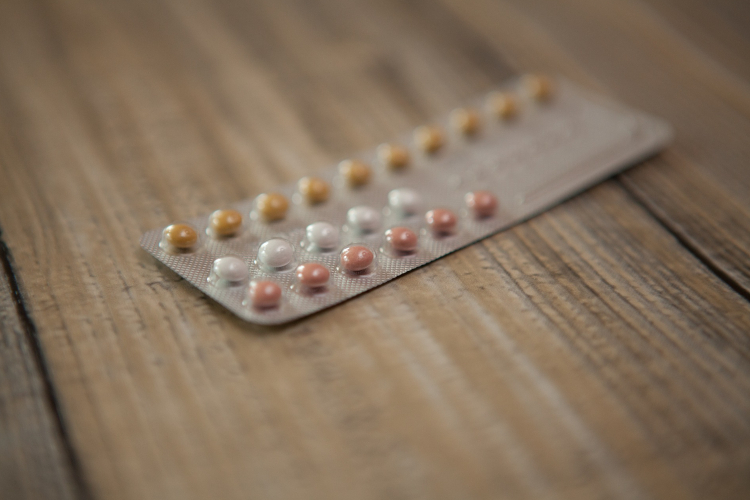