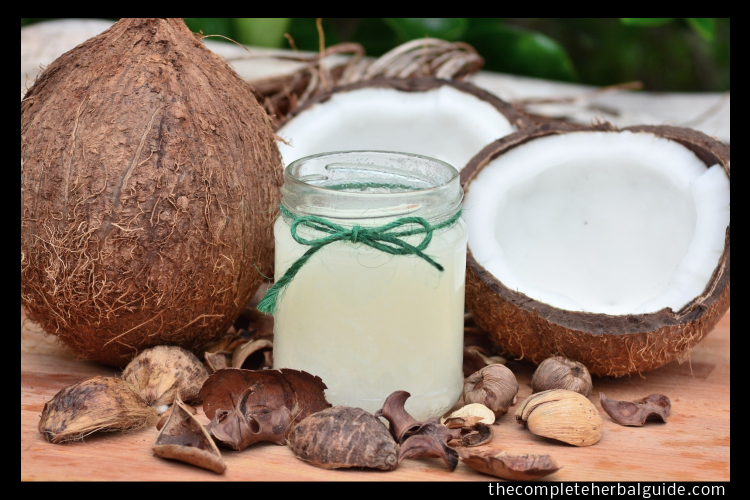 In recent years, the popularity of coconut and particularly coconut oil has soared because of touted health benefits. Fueling the coconut oil trend, celebrity endorsements have claimed the ingredient to help blast away belly fat, curb appetite, strengthen the immune system, prevent heart disease, and stave off dementia and Alzheimer’s disease. A survey found that 72% of Americans rated coconut oil as “healthy,” though only 37% of nutrition experts agreed. Coconut oil is popular in several trending diets including ketogenic and Paleo diets.

As consumer demand for plant-based foods increases, coconut oil has become a popular fat choice for its rich flavor with a mild coconut aroma. 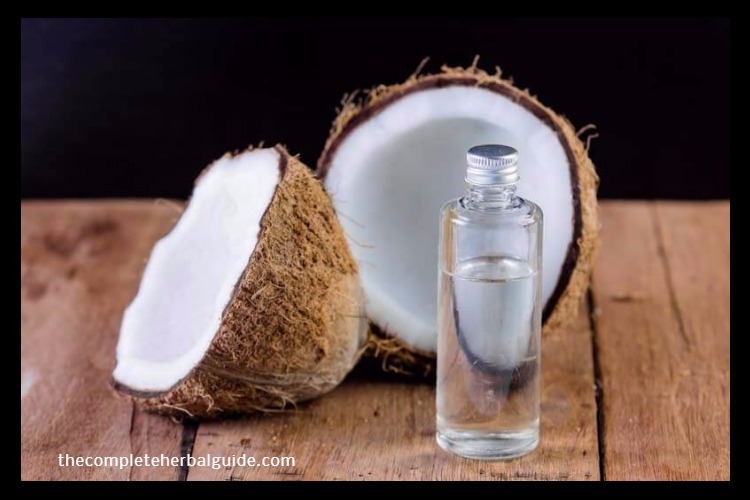 What is Coconut Oil?

Coconut oil comes from the nut (fruit) of the coconut palm. The oil of the nut is used to make medicine. Some coconut oil products are referred to as “virgin” coconut oil. Unlike olive oil, there is no industry standard for the meaning of “virgin” coconut oil. The term has come to mean that the oil is generally unprocessed. For example, virgin coconut oil usually has not been bleached, deodorized, or refined.

Some coconut oil products claim to be “cold pressed” coconut oil. This generally means that a mechanical method of pressing out the oil is used, but without the use of any outside heat source. The high pressure needed to press out the oil generates some heat naturally, but the temperature is controlled so that temperatures do not exceed 120 degrees Fahrenheit.

Coconut oil is sometimes applied to the skin as a moisturizer, for neonatal health, and to treat eczema and a skin condition called psoriasis. Coconut oil is also used in hair products to prevent hair damage.

Coconut oil is 100% fat, 80-90% of which is saturated fat. This gives it a firm texture at cold or room temperatures. Fat is made up of smaller molecules called fatty acids, and there are several types of saturated fatty acids in coconut oil. The predominant type is lauric acid (47%), with myristic and palmitic acids present in smaller amounts, which have been shown in research to raise harmful LDL levels. Also present in trace amounts are monounsaturated and polyunsaturated fats.

Coconut oil contains no cholesterol, no fiber, and only traces of vitamins, minerals, and plant sterols. Plant sterols have a chemical structure that mimics blood cholesterol and may help to block the absorption of cholesterol in the body. However, the amount found in a few tablespoons of coconut oil is too small to produce a beneficial effect.

Coconut oil contains a certain kind of fat known as “medium chain triglycerides.” Some of these fats work differently than other types of saturated fat in the body. When applied to the skin, coconut oil has a moisturizing effect. 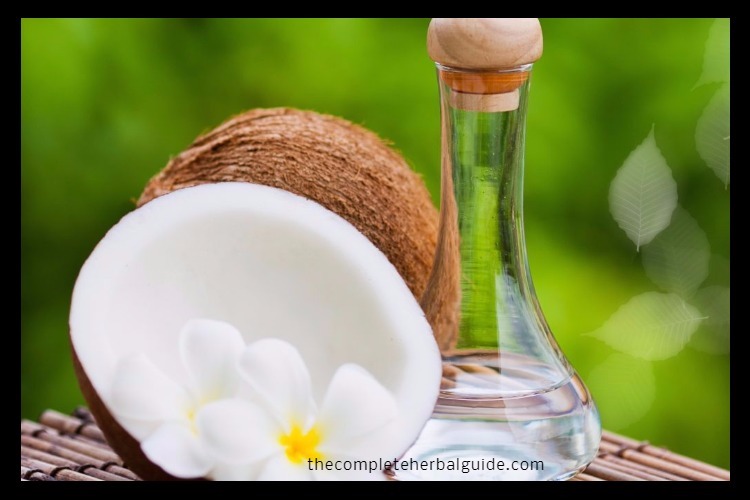 It increases “good” cholesterol. A component in coconut oil has been found to improve your “good” HDL cholesterol but remember But it also raises your LDL “bad” cholesterol

It appears to preserve insulin action and insulin resistance in mice.

It has antistress and antioxidant properties, which could make it useful as an antidepressant, according to research in rodents.

It makes hair shinier because it penetrates better than mineral oils.

It has been found to enhance protective barrier functions and have an anti-inflammatory effect on the skin in humans.

It has reversed hepatosteatosis, a type of fatty liver disease, in rodents.

Helps To Rid The Infection Candida

Coconut oil has reduced colonization with Candida albicans in mice, suggesting it could be a treatment for candida.

One argument has been that coconut oil leaves people feeling “fuller” after eating, so they will not eat so much. However, other research has shown that this is not the case.

Coconut oil stimulates digestion with its lubricating effect. This can also help pacify Vata dryness and prevent constipation. The unique saturated fats in coconut oil also have anti-microbial properties that fight harmful bacteria, candida, and parasites that cause digestion issues such as indigestion, bloating, and irritable bowel syndrome.

The rare medium-chain fatty acids (MCFA) in coconut oil are small compared to other fats and easily broken down into energy, so they don’t have to be stored as fat or spike blood sugar levels. A study published in the journal Lipids reported 40 women found a decrease in belly fat when taking coconut oil internally along with an exercise routine.

The lauric acid in coconut oil is also found in breast milk—it helps support and builds the immune system of a growing baby. Virgin coconut oil happens to have the highest concentration of lauric acid outside of mother’s milk. This potent fatty acid helps support a healthy immune system with its anti-viral properties.  Studies suggest that lauric acid may decrease infection or transmission of the following viruses: HIV virus, herpes simplex virus-1, and the measles virus.

A Sanskrit term Dravya is similar to the “doctrine of signatures” which states that each body part has a food that looks similar to it that can be used to treat ailments in that part of the body. For example, a walnut looks similar to a brain and happens to be high in omega 3s, which are great for brain health.

Likewise, a coconut resembles a cranium and is used to nourish brain tissue, improve cognitive function, and supply lubrication to the skull and brain. Ayurveda also considers the coconut to be Maha Medhya, a great nourishing source for the mind.

Though one of the highest sources of saturated fat in the plant kingdom, coconut oil has actually been proven to be beneficial for cardiovascular health. Approximately 50 percent of the saturated fats in coconut oil is made up of lauric acid and is not at all like man-made, processed hydrogenated oils.

Coconut oil has been used in India for generations to help with overall skin health. It can be used as a moisturizer to improve complexion, suppleness, and elasticity. It can also be used to treat an array of skin problems such as psoriasis, dermatitis, eczema, dry or flaky skin, scars, and burns.

Ayurvedically speaking, coconut oil has a cooling property. Therefore, it can be used as a full body and face moisturizer, particularly in the summer for its cooling effects and SPF properties.

It’s also extremely beneficial for the Pitta dosha, which is associated with the fire element, to treat symptoms associated with Pitta imbalance including anger, inflammation, and high blood pressure.

Coconut oil has also been used in India for ages to promote oral health. It can be used to clean and whiten teeth, and it helps to support strong and healthy teeth and gums. Try these natural remedies using coconut oil and impress your dentist the next time you go in for a cleaning.

Coconut oil is used as a treatment for painful joints and arthritis in Ayurveda, especially for arthritis due to Pitta inflammation. 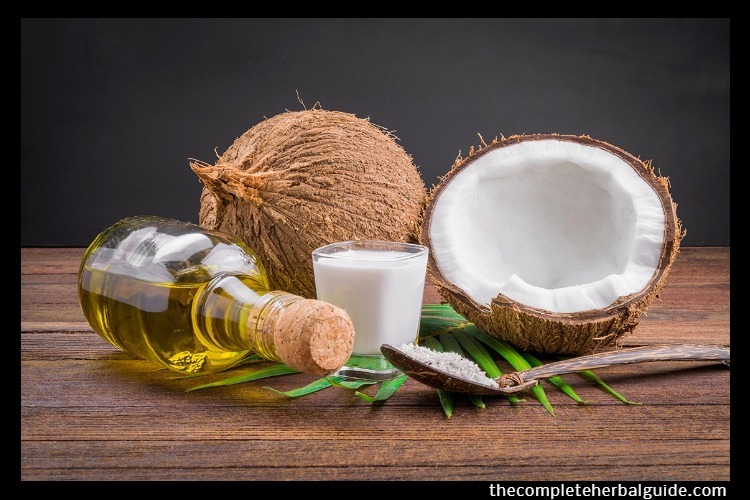 Not All Coconut Oil Is Created Equal

Not all coconut oils are the same, and some are more healthful than others.

This is just as harmful as other highly processed oils that contain trans fats. These are not healthful.

This is extracted from chemically bleached and deodorized coconut meat.

This is extracted from the fruit of fresh, mature coconuts without using high temperatures or chemicals. It is considered unrefined, and it may offer health benefits.

Coconut oil, or copra oil, is an edible oil extracted from the kernel or meat of mature coconuts harvested from the coconut palm. It has various applications. Because of its high saturated fat content, it is slow to oxidize and, thus, resistant to rancidification, lasting up to six months at 24 °C without spoiling. Wikipedia 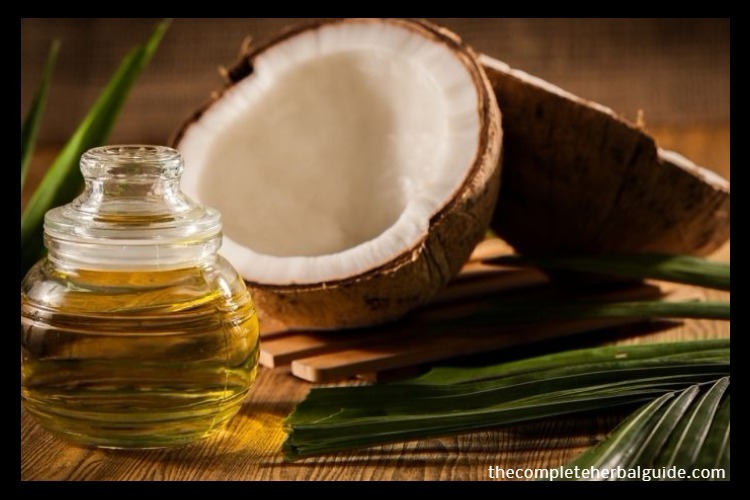 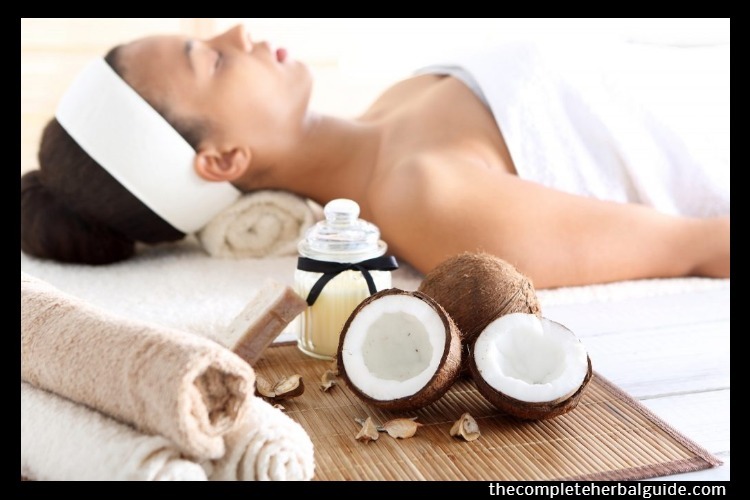 How To Use Coconut Oil

Try this: Abhyanga is a traditional Ayurvedic massage that you can practice on yourself.

Coconut oil can also be used as a natural deodorant as it’s a proven killer of odor-causing bacteria.

Try this: Make your own delightful toothpaste from this recipe.

Run container of coconut oil under warm water to melt. Combine all ingredients and stir as the oil cools. Scoop or pour the mixture into a small glass jar and seal with a lid. Let cool.

Another way to keep your mouth and teeth clean is with oil pulling, an Ayurvedic practice for oral health and detoxification that involves swishing oil around in your mouth. The theory is that the plaque and bacteria bind with the oil and is then disposed of when you spit it out, which purifies the mouth of harmful toxins. If you think about it, the plaque on your teeth is not water-soluble, it’s fat-soluble, so it makes sense for dental care.

Mix all ingredients together and rub over painful joints. Cover the area with saran wrap or dish towel to avoid staining clothes. Place a warm to hot water bottle over the area for 20 to 30 minutes so the oil can absorb into the skin.

When heated at high temperatures, many other oils including, olive, soy, corn, and vegetable oil become unstable and can even produce toxins and trans-fats. Coconut oil is one of the only oils that can withstand high temperatures, which makes it a great choice for cooking.

It has a wonderful nutty and slightly sweet flavor and works well with a variety of dishes, especially desserts.

Mix all ingredients together in a blender and enjoy. 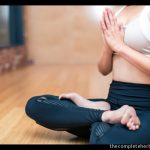 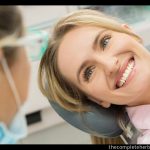